Nature-based solutions are promoted as the instruments for urban environments to cope with the impacts of climate change. The concept considers existing paths such as green infrastructure for ecosystem-based adaptation and responsive use of biodiversity. But what makes the difference between urban green and a green infrastructure? In the second part of our series on nature-based solutions, we showcase ecosystem-based adaptations to urban heating.

The double whammy of extreme heatwaves and UHI

Climate change has significant impacts on society and biodiversity. One such risk area is the increasing frequency and severity of heat waves. Elevated air temperatures between 28°C and 37°C already affect thermal comfort and the health of residents. Excessive heatwaves exacerbate air pollution, inflate the energy demand of buildings and hinder outdoor activities [1]. This effect is amplified in cities, where high construction density, increasing urban blocks, transportation and its daily pollution effects, heat-absorbent surfaces, and receding vegetation can lead to local hikes in temperature known as the urban heat island effect (UHI). The impact of heatwaves and the UHI effect can however be decreased by temperature-regulating nature-based solutions. Through a careful design and layout following a bioclimatic concept, a combination of tools such as increasing green areas, vegetative cover on roofs and using cool pavement can significantly reduce outdoor temperature in dense urban environments during the summer. To illustrate this, we introduce the bioclimatic design-support utilized by ABUD in the Zugló City Centre project.

District XIV is one of the greenest districts of Budapest, with Városliget, the City Park located on its western side. Although rich in green areas, many parts of Zugló are built in a way that supresses urban vegetation. However, the district centre is about to change with the development of Zugló City Centre, a mixed-use project designed by Zaha Hadid Architects that will incorporate offices, commerce, and residents near Bosnyák square. The development of Bayer Construct will be realized on a 6,8-hectare site with a total gross floor area of 220,000 sqm. The project aims at becoming the new heart of Zugló, and to serve as the hub for the neighbourhood. 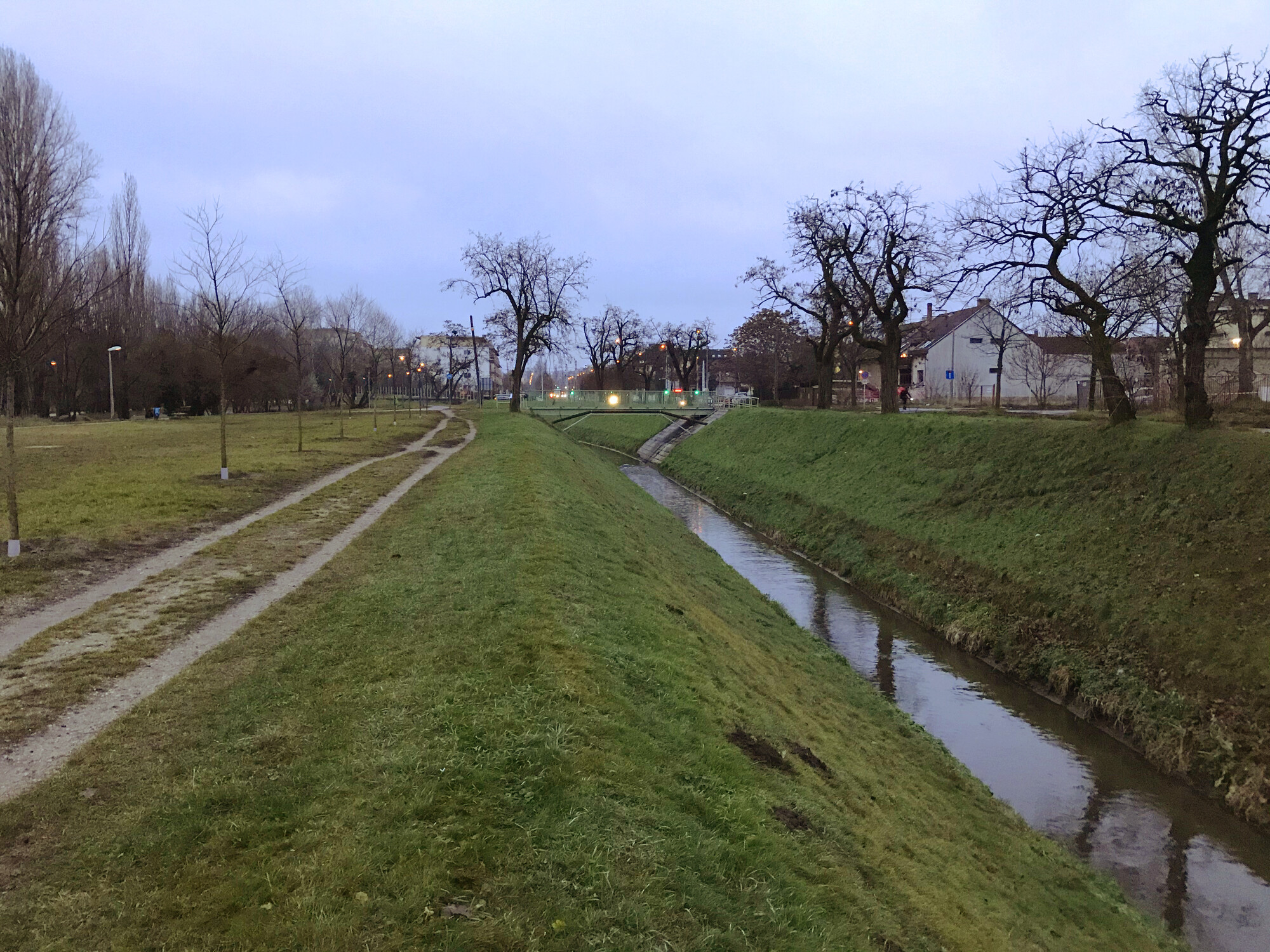 It is well known that a dense urbanization pattern creates UHI effect. Zugló City Centre is planned on an area that is completely underdeveloped and overgrown with vegetation. A business-as-usual development of a dense urban core would result in intolerable hotspots in outdoor environments undermining the vision for a vibrant centre, not to mention risking the creation of a public health hazard. It was paramount for the project team to understand how the design influences the combined effect of air temperature, wind speed, air humidity, radiation that shape the microclimate and outdoor comfort [2].

The way the Zugló City Centre was adapted to these conditions is through a strategic combination of cool, permeable surfaces, increasing green areas, in particular trees, vegetative coverage of constructions, and open water surfaces. It is important to mention that a green infrastructure always bears multiple functions, and these must be incorporated in the design. The role of this adaptive green infrastructure was not only to decrease the local heat island effect, but also to treat stormwater runoff, improve air quality, store carbon, provide food and new habitats for flora and fauna (it is important to note that the current overgrowth is heavily infested with invasive plants).  Specifically for urban heating, vegetation can reduce urban temperatures by several green infrastructure practices such as: evaporative cooling or the energy used for transpiration instead of heating the air, through shading by trees and tall vegetation that directly shadow and intercept solar radiation and by albedo effects that alter the reflection and absorption of solar radiation [3].

What is different in the design of UHI-mitigating nature-based solutions, compared to conventional urban greening? First, we needed to specify the urban climate in the Zugló City Centre area. Urban climates can be considered a microclimate that result from the combined effect of buildings and human activities that can cause a noticeable effect on the thermal energy dynamics of a city. Even if we are in one city, local microclimates can differ due to urban morphology, surfaces, polluting activities, causing local variations in wind, humidity, solar radiation, and temperature [4].

Thus, we performed a series of microclimate analyses and simulations of multiple masterplan scenarios. Three scenarios were investigated: (i) the current conditions, (ii) the masterplan of the project with the initially proposed massing, without green infrastructure and (iii) the last scenario with the addition of green infrastructure. We used computational microclimate simulations to compare design scenarios, comparing the individual and combined and impact of shapes, layouts, surfaces, vegetation types and arrangements.

First, we compared the current (i) and the initial built (ii) scenarios to identify critical hotspots during summer, with extreme discomfort levels of 27.10°C minimum and 33.45°C maximum during noon. (Figure 2). 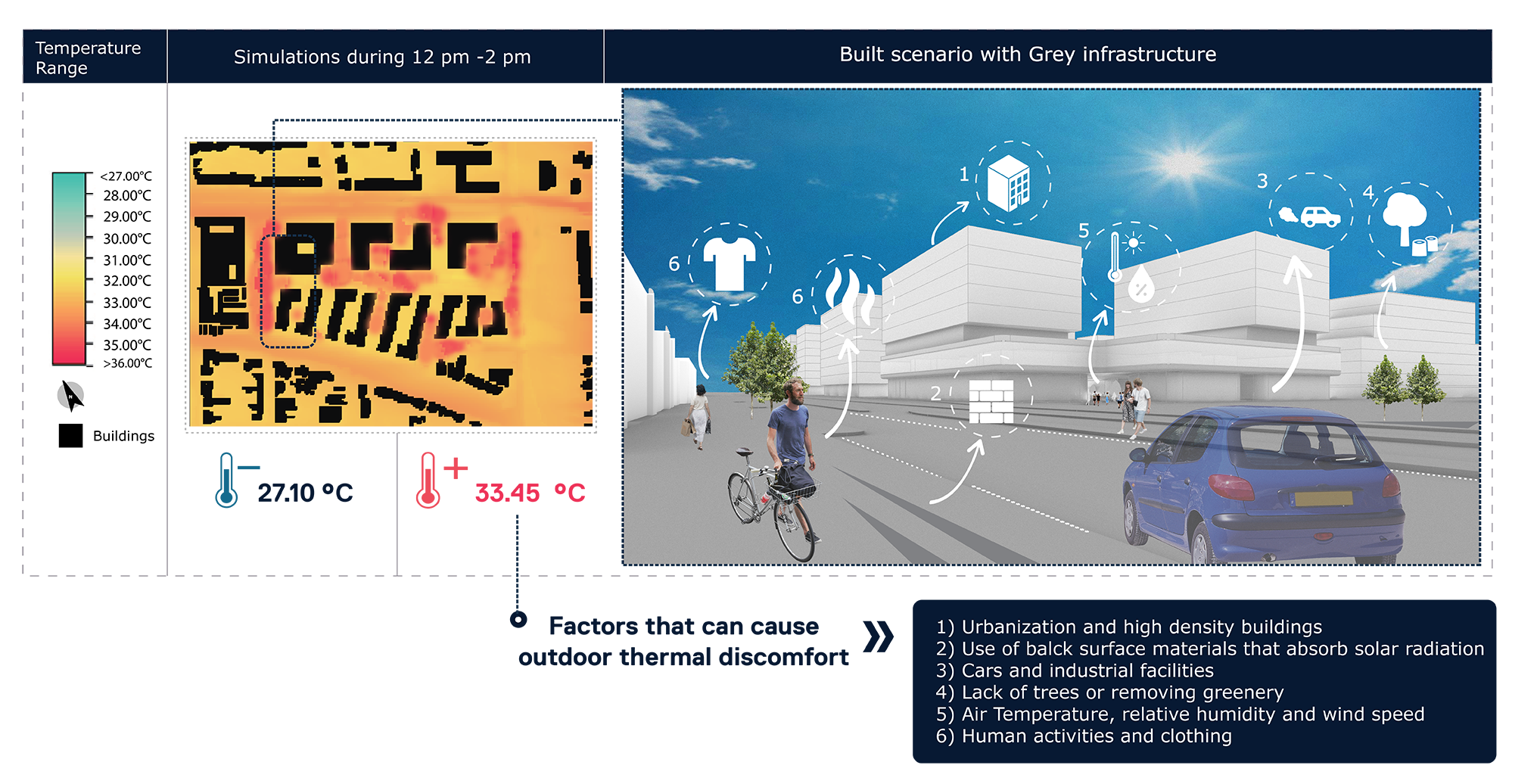 Second, we evaluated multiple iterations of the built-green scenario with the proposed green and blue infrastructure strategies, including the implementation of green roofs, trees, and public green areas in the neighbourhood.

Looking at the final green scenario as shown in Figure 3, the results show comfortable temperature levels during the morning hours with an average of 21°C minimum and 28°C maximum, which are still between the comfort levels for summer temperatures, compared to ranges of the initial built scenario.

The simulation can be used to better understand the marginal benefits of various NbS components. In the Zugló City Centre masterplan, surface management resulted in the highest impact. Natural ground surfaces such as bioswales, infiltration strips, green roofs, and water surfaces reduced peak temperatures by 3.5 °C approximately every hour. These interventions reduce the amount of heat absorbed by surfaces. The role of trees should also not be understated. Shading alone, provided by trees, helped reduce the local temperature by approximately 0.5 °C.

In conclusion, nature-based solutions in Zugló City Centre essentially provides a – 3.8 °C air temperature average during the hottest daily hours, and a – 6 °C peak temperature reduction during summer. The project might be more urban in character than the remainder of the district, but with smart design, a high-performing green infrastructure was achieved. This would not have been possible without iterative, dynamic simulation of how all design decisions translate to microclimatic conditions, nor without integrating the design of green spaces for cooling with other ecosystem services: habitat provision, water regulation, air purification, carbon storage, and providing quality public space. What makes the difference between urban greening and nature-based solutions? The capability of designers to model complex ecological performance, and an integrated design process. 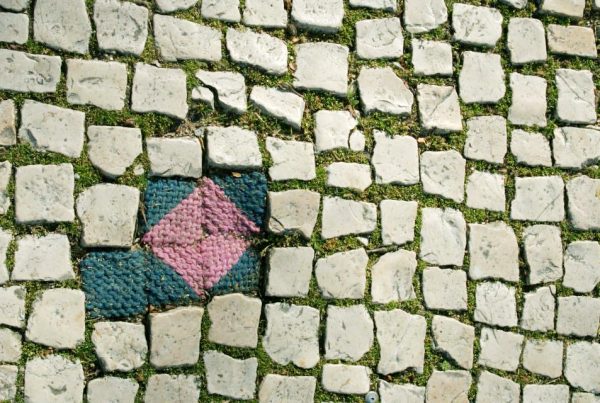 Architecture and Society in Interaction